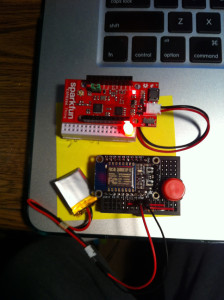 3 thoughts on “ESP8266 devices from Adafruit and Sparkfun”