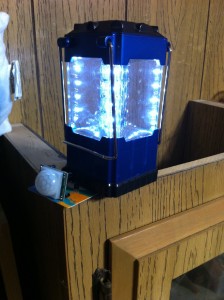 I wanted to be able to have an electric lantern turn on as I entered the room. I decided to use a PIR sensor (Pyroelectric (“passive”) InfraRed sensor) as the detector. First I had to use a breadboard and the parts to get it worked out. 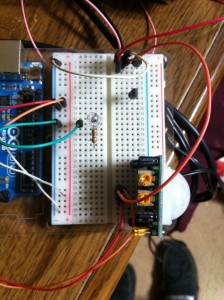 There is a second transistor on the breadboard as well as an LED and resistor. I didn’t use these in the project. They were left over from an Arduino project.

I am powering the PIR with 5v from a USB phone charger.  The three AAA batteries inside the lantern will light up the lantern’s LEDs.

A PIR has three pins.  DC+ in, Output, and Ground (-).  I connected the Output pin to the Base of the transistor.  At first I used a 2n3904 transistor.  This worked will when I as just using an LED on the breadboard as the light.  When I hooked up the lantern there was too much power and it bled through.

I put a guitar pick between one of the batteries on the positive side and put wires from the battery and the post where it was to touch.  It was like adding a switch.  The 2n3904 didn’t stop the electricity from flowing.  I had a 2n2222 on hand and ready that it can handle about three times as much and the 2n3904.

The schematic ends up looking something like this picture. 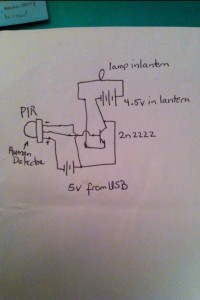 Perhaps I should be using a resistor between the PIR and the Base of the transistor.  So far the transistor doesn’t seem to get hot or mind.

Once I had the design working I had to solder everything together. I could not find an electronics board with all the holes pre-drilled. I knew I have one somewhere. I decided to use an old iTunes gift card as the circuit board. I drilled holes in it for the PIR’s pins, as well as for the transistor. I used short jumper wires to create the wiring I wanted. To connect the DC + and – pins of the PIR I soldered short wires to them and poked the other ends up through holes drilled in the card. I used a USB cable taken from a broken mouse and plugged it in onto the exposed pins I just created. For the fires running to the lantern I soldered two wires to the collector and emitter of the transistor and poked the other ends up through the card. I then soldered longer wires to those newly created pins. 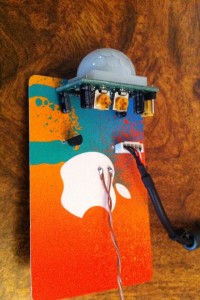 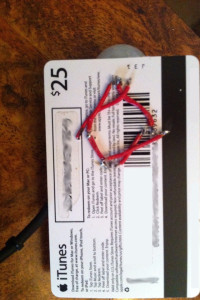 Now came the tricky part. I took a small piece of an expired credit card and glued aluminum foil on both sides. After the super glue was dry I checked to see that the foil was not touching from one side to the other. I soldered the two long wires to the aluminum, one per side. Now I had a separator that I would be able to use inside the battery case of the lantern. I removed one of the batteries from the lantern and put this little piece at the positive end of the battery while I reinserted the battery. I think using a copper clad circuit board would have been easier to work with. You know the kind I mean, copper on both sides so you can etch your own designs with some acid. I think the closest store that might have this in stock, on short notice, is about 45 miles away.

I read information about the PIR from Adafruit. (www.adafruit.com) I love the NeoPixel LEDs they sell.  They are easily programmed and are very bright.

One thought on “PIR and electric lantern”